Added 1 year ago by admin
54 Views
Classic Mood Experience The best masterpieces ever recorded in the music history.
Join our Youtube: https://goo.gl/8AOGaN

"Stardust" is a jazz song composed by American singer, songwriter and musician Hoagy Carmichael. Now considered a standard and part of the Great American Songbook, the song has been recorded over 1,500 times either as an instrumental or vocal track, featuring different performers. During his time attending Indiana University, Carmichael developed a taste for jazz. He formed his own band and played at local events in Indiana and Ohio. Following his graduation, Carmichael moved to Florida to work for a law firm. He left the law sector and returned to Indiana, after having learned of the success of one of his compositions. In 1927, after leaving a local university hangout, Carmichael started to whistle a tune that he later developed further. When composing the song, he was inspired by the end of one of his love affairs, and on the suggestion of a university classmate, he decided on its title. The same year, Carmichael recorded an instrumental version of the song for Gennett Records.
In 1928, Carmichael left Indiana after Mills Music hired him as a composer. Mills Music then assigned Mitchell Parish to add words to the song. Don Redman recorded the song the same year, and by 1929, it was performed regularly at the Cotton Club. Isham Jones's 1930 rendition of the song made it popular on radio, and soon multiple acts had recorded "Stardust". Because of the song's popularity, by 1936, RCA Victor pressed a double-sided version that featured Tommy Dorsey and Benny Goodman on respective sides.
By 1940, the song was considered a standard. That year, RCA Victor released two more recordings of "Stardust": one by Dorsey featuring Frank Sinatra as the singer and one by Artie Shaw. Shaw's recording sold one million copies and Glenn Miller's rendition was published the same year. Artists including Jo Stafford, Ella Fitzgerald, Nat King Cole, Billy Ward and his Dominoes, Ringo Starr, and Willie Nelson have recorded "Stardust". The song was featured in several films, including Goodfellas, Sleepless in Seattle, and Casino. It was inducted into the Grammy Hall of Fame in 1995 and added to the National Recording Registry in 2004. 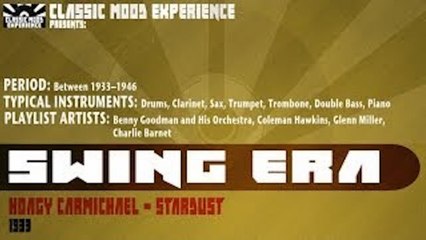