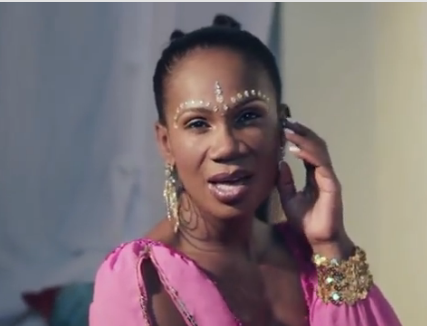 Award winning Jamaican songstress, talented, beautiful and extremely passionate about her music, petite and 5'3, thiswould be the best way to describe Sophia Brown, known to all her friends as THE SENSATIONAL “SB”!

Sophia will be highlighting her year with a big date in the US on November 22, 2014, where the 2014 Lifetime Achievement Linkage Award winner will join R&B/disco legend Melba Moore as a headlining performer at the Lady Flava Radio Network Awards Show in Hartford, Connecticut. “I am honored to have the opportunity to share stage with an R&B legend like Melba Moore, who has not only given so much to the music industry but is an acclaimed actress as well. I see this as a tremendous opportunity for me to broaden my musical horizon and work with a different kind of audience. I am ready to rock the house” stated Sophia. Brown is not only performing that night, but has also been nominated in the “Best Female Lovers Rock Vocalist” category which also honors hip hop, R&B, gospel, disco and dance-hall artists. “It's always nice to be recognized for your work but what makes this award even more special to me is that is is not coming from the Jamaican diaspora so to speak but from the wider music and film industry in the USA.”

2014 started with Sophia back in the studio working on her latest single “Touch Me,” produced by Denver D Music, for her label “Music Mecka Records” the first single of her upcoming 3rd album. This single is distributed internationally on iTunes by Zojack Worldwide. Her first performances of the year were in Jamaica before hitting the international scene. She has also recently recorded the single “We're Lovers,” with Los Angeles based artist Black Ice and has shot the music video for that single before embarking on a month long “Catch Me If You Can” US tour. This summer she released a lovers rock ballad single about falling in love “Wide Awake,” produced by Christopher Tyrell and distributed by Zojack Worldwide.

Sophia has also recently finished recording a new single with the Chilean Band Gondwana, which will be released on their upcoming album later this year.

Sophia Brown's first position as a dance choreographer in 1986 on the Appleton Estate Tour for Dance-hall Pioneers, opened the door for her to showcase her musical talents with the Jamaican Tourist Board. This was the fortuity that gave life to Sophia's dream of becoming an International & Inspirational acclaimed Reggae Artiste.

In 1988, with a network of support she left her home of Parish St. Elizabeth to live closer to Kingston the music capitol of Jamaica in St. Catherine. The beautiful and talented Sophia, standing at a petite 5'3" was extremely passionate about her music. She persevered and knew that "every journey begins with a first step" and it took her 3 years, but she finally realized her passion and released her 1st recording, a single entitled "Jig Me" Produced by Outta National in 1992. This gave Sophia her very 1st local radio listener-ship, resonating well with reggae music fans! This created an opportunity for Sophia to perform alongside popular International Reggae & Hip-hop Artists Shabba Ranks, Lady Patra, Frankie Paul, Richie Stephens & Doug E. Fresh in Montego Bay the same month.

Sophia destined to make music her life, had to endure numerous setbacks in her career, only to make her stronger. But, nothing has deterred her from fulfilling herlife's dream of becoming an internationally acclaimed recording Artist. In 1992, Sophia performed in the famous "Reggae Sun Splash" in Montego Bay. This sensational performance was greatly received escalating her career, with the collaboration of renowned UK producer Mad Professor. This collaboration set in motion this "Lovers Rock Artiste" putting her on a roll. Initially, she landed a recording contract with the Cayman Island Co. Strawberry Records, which was later sold to CMI in 1995, until CMI declared bankruptcy. This didn't put the cabash on Sophia, she remained focusedforming her own record company called "Music Mecka Records" with colleague Dale Dunkley, together they released a host of singles during that time, including "Baby Tonight" and "Give it up" which received favorable airplay.

Later on, Sophia took to the road doing several tours both locally and abroad, including NY, Arizona and Virginia. In 2002, in Norfolk, Virginia, She performed with such greats as Snoop Dogg, Lil Kim & Ja Rule. In 2007, on her return to Jamaica, Sophia recorded a single entitled "Love You Pure" a Reggae/R&B track, "I was inspired to write that song after listening to a friend's own personal experience. It was a beautiful song that could have easily been a Valentine's Day classic." said a smiling Sophia Brown. A video for this single followed eventually finding its way on the local and E.Strip Video Charts peaking at #3.

Sophia continued recording and releasing other hit singles under her "Music Mecka" label without Dale Dunkley, before releasing her first album "The Spotlight" April 15, 2009. The album had an official press launch and success began to knock on Sophia's door. 2009 found her "Weak to You" single, soaring to the top of the local charts! She attempted to attract a younger demographic by the release of her new single "Gimme That Good Love" and video. Sophia was also nominated for the local EME Awards (Excellence in Music & Entertainment) Awards, as “New Female Artist of the Year” and while "Gimme That Good Love," single found its way to the top of the CVM hit list Video Charts.

In January 2010, Brown also met with kids from the Alman Town Primary School in Kingston where she was invited to give a motivational speech. She spoke about the importance of self-esteem. "Their self-esteem is a very big part of anything they do," she remarked, “when they have that, they can accomplish anything."

2010 through 2011 saw a steady increase in both local and U.S. promotional activities for Sophia, with the release of her new singles "Let It Be Me" produced by Cash Flow Productions, "Gimme That Good Love" distributed by Universal Records and "Lovers Rock" produced by her label "Music Mecka." "Gimme That Good Love" made it to #19 on the BBS World Chart, "Let It Be Me" hit N.Y. and South FL. Top 30 Reggae Single Charts, and in the 100 Most Popular Songs, debuting her entry to the U.S. charts. She also made the Top 100 songs for 2010 in N.Y & South Fl. coming in at #100. Sophia charted in the Top 10 Urban, Chris Coxson Reggae Top 10 on NY Radio and Top 50 Pop for Satellite, College & Internet radio, marking her cross-over from Reggae to Reggae-Pop. "Let It Be Me" hit a UK base chart as well. Additionally, she created a cover version of the American R&B star Betty Wrights' song “Tonight is The Night.” “Tonight is The Night” made it to number one on Jamaica' s music charts, as well as number one in TEN other countries! In 2010, Sophia once again garnered a nomination at the EME Awards this time for “Best Female Vocalist of the Year.”

Sophia continues to climb the international charts and released her newest, most successful and acclaimed album “Catch Me If You Can” on March 28, 2012, distributed by Zojack Worldwide, it's a masterful blend of Hip-Pop, Neo-Soul, and Hip-Reggae. Sophia transcended beyond the borders of Jamaica to the International scene, and crossed genres with her beautiful ballads such as “Love You Pure,” ”Weak To You” and “I’ am a Rose.” Sophia had numerous press launches promoting “Catch Me if You Can” in NY, Jamaica, Barbados at the Reggae Festival, Los Angeles and many other locales. Monumentally, “Catch Me If You Can,” found itself in the top 25 preliminary rounds to be nominated for the “Reggae Album of the Year” Grammy Award in 2013. Additionally, finding its way to #55 on the top 100 Reggae Albums on the iTunes chart. Later that year, she was nominated for the Irawma Awards in South Florida.

In 2013, Sophia's travels have taken her across the globe, journeying to places noted for their music and art including, European capitals in France & Italy using these cities and her fellow artists as a palate on which to create her vision, while performing mind blowing performances to those in attendance at her shows. “Everybody has their own pattern, their own way of presenting, so it is up to you to observe them so that you can better develop as an artist.” said Sophia.

Additionally, Sophia is sporting a new merchandise line marketing her clothing and accessory products through Café Press.com, come check it out!

So keep your eyes & ears out for “Reggae in Motion”, and your feet to the floor for what Sophia has in store for you, in just a few months more!